The hydraulic cone crusher handles secondary crushing in the production line, and specializes in processing of medium-hard materials. During the operation of the equipment, there will be problems such as tooth cracking, wear, jamming, and undercutting of the umbrella teeth, which will not only affect production, but also Cause direct or indirect economic losses. Through actual cases, this article analyzes the causes and finds out solutions and countermeasures for the problems.

When the crusher works, the motor drives the eccentric sleeve to rotate through the horizontal shaft and a pair of bevel gears. The main shaft of the crusher rotates under the force of the eccentric sleeve, so that the surface of the crushing wall is sometimes close to and away from the surface of the mortar wall, thereby the iron slag is continuously crushed and crushed in the crushing cavity. The working principle of hydraulic cone crusher is shown in the figure below. The hydraulic oil is pressed under the plunger of the hydraulic cylinder, the crushing cone rises, and the slag discharge port shrinks.

Although the hydraulic cone crushing in this case has fewer iron jamming conditions, the phenomenon of wear and tooth cracking is very serious, and even the umbrella teeth are undercut, causing the machine to fail to operate normally.

Before the transformation, the hydraulic cone breaking was frequently repaired and the repair time was long. Generally, it needs to be repaired once every 15 days (the shortest is even half a month), and each inspection is nearly 24h or even longer. When the undercut of the umbrella-shaped tooth is severe, the umbrella-shaped tooth needs to be purchased externally, so the maintenance time is longer.

Due to the uncontrollable condition and maintenance of cone crushing equipment, this has greatly affected the planning and economic indicators of slag iron screening production, and production and sales are often passive. 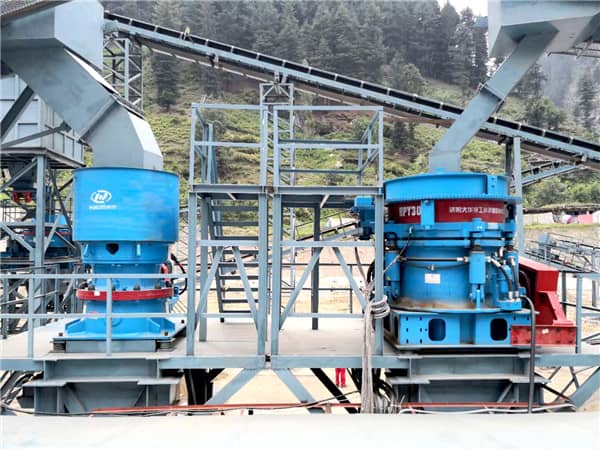 The factors that cause the hydraulic cone to break the teeth and cause serious wear are as follows:

① The protective device for cone breaking is not perfect;

③ The specifications of the slag iron material entering the cone crusher meet the design requirements of the cone crusher, but the amount of slag feed is too large (the approved output is 45-120t / h);

⑤ After the cone crusher is stopped, it will be forcibly started with a heavy load;

⑥ The cone crusher does not match the transmission motor (designed motor is 110w, 735r / min).

The site observation and summary found that when the cone broke into the iron block, it was not manually released in time and was forced to stop. The slag block material at the cone break slag inlet was piled up. When the slag block material is cleaned, the operator forcibly starts the motor with a heavy load for several times in order to shorten the slag removal time, which causes the cone to break the internal transmission umbrella teeth for multiple overload fatigue and break. In addition, the ability to start the motor forcibly with a heavy load indicates that the protection device is not complete.

At present, in the industry, hydraulic cone crushing, tooth breaking, and abrasion conditions are usually dealt with by: improving the material of the equipment and surfacing hard alloys. According to the principle of cone breaking, as well as the early investigation and research on the causes of equipment failures, combined with the actual situation of the iron slag production line, the following countermeasures are taken to repair and transform.

② Adjust the current of the cone breaking protection device so that it cannot be forcibly started or tripped for instant protection under heavy load.

③ Check the metal content inside the hydraulic oil tank every month.

After the transformation, the cone crushing equipment runs smoothly, and the surface of the umbrella teeth is basically free of abrasion, which greatly reduces the phenomenon of blockage and seizure. The umbrella teeth have never been undercut and the maintenance cycle has been extended.

1) Reduce the number of daily inspections and maintenance costs

After the transformation is completed, the maintenance period is 90d (up to 150d), and the overhaul of the cone breakage has been synchronized with other equipment on the production line. Each inspection only needs 4-6h, mainly for routine inspection and maintenance such as lubrication, inspection and tightening.

HPY500 hydraulic conical broken umbrella tooth originally had an on-line service life of about 700d. After the improvement, the service life without going offline can be predicted to be at least three years according to the operating effect of nearly one year. After the transformation of the bevel-shaped gear is basically intact, the cone-breaking performance is still good, which fundamentally solves the problem that the bevel-shaped tooth is undercut, thereby greatly reducing the equipment procurement cost.

Next Article: How to solve the Problem of Slow Feeding of Vibrating Feeder?